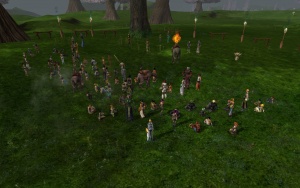 At Saturday, 28 August, at 19:00 GMT, an ingame memorial service was held for a longtime Ryzom player and volunteer CSR (Customer Service Representative) who had passed away a week earlier.

The procession started at the gates of Yrkanis and headed to an open field in Majestic Garden. There an area was set up specially for the memorial.

Numerous players held speeches that, all together, lasted several hours. A memorial plaque was erected where people could leave their farewell messages. The memorial event was concluded with fireworks and the releasing of Merrielyn's CSR mount.

A mounted memorial procession and service will be held in honor of GM/EG Merrielyn/Rivendell, HO of TheNewEmpire, on 28 August at 19:00 GMT leaving from the Yrkanis gates. All homins, with or without a mount, are invited to share in the Ryzom tribute and farewell to our beloved friend. 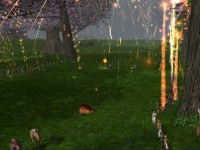 Setting off the fireworks.

Players gathered at the gates of Yrkanis, many of them bringing their mounts for the procession. Originally the plan had been to move to Virginia Falls in Hidden Source and have the memorial there. But instead the procession headed to the location set aside in Majestic Garden, just off the crossroads, northwest of the Arena and west of the Green Seed camp.

Players were invited to share their stories about their lost friend, and many players took the stand to tell of their own experiences.

If anyone has a log of these stories, you are encouraged to add it to this article.

The memorial event was attended by probably more players than had been seen together in Ryzom in many months, as well as by a lot of CSRs, including some from the other servers.

At the end, all the players present were given fireworks and asked to form two lines. As they set off the fireworks, Merrielyn's Tenwo (CSR mektoub mount) was lead through the lines to be released into the wild.

Lastly, all players were encouraged to share their last goodbyes at the memorial plaque, which linked directly to the forum thread set aside for that purpose on the ingame forums.

Tenwo wanders past the plaque.

Though most of the memorial site was only temporary and disappeared again after the event, the memorial plaque (in the shape of a Ring terminal) remains at the location permanently. Clicking it still takes a player directly to the forum thread with all the last goodbyes.

Merrielyn's Tenwo, which was released into the wild, also remained as a permanent reminder, and can still be found peacefully wandering the area around the memorial site in Majestic Garden.

Retrieved from "https://en.wiki.ryzom.com/w/index.php?title=Event:Memorial_Service_for_Merrielyn/Rivendell&oldid=25465"
Categories:
This page was last edited on 27 February 2015, at 22:22.