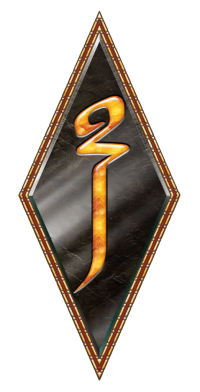 The Fyros hold a belief in four idealogical pillars, all of which must be upheld by every Fyros for the empire to succeed. Each pillar is represented by a monument in the area around Pyr, and any Fyros wishing to become a recognised citizen of the empire must know and understand the pillars intimately.

The first pillar of the Fyros civilisation, truth is valued highly among the Fyros. This pillar, however, is selectively applied - while it is considered unacceptable and cowardly to lie to one's comrades; lying to one's enemies is simply a part of intelligent battle strategy.

Possibly the strongest value of the Fyros people, honour is paramount. Fyros are expected to be upright, with a sense of integrity - petty matters or deceitful doings are considered beneath a great Fyros warrior. A true Fyros would choose an honourable death over a cowardly life.

No Fyros, not even the Emperor, is above the Law; the ancestral law of the Fyros civilisation demands the respect of all Fyros. To break the law, for a Fyros, is to act utterly without honour or loyalty.

Traditionally the Karavan are venerated as disciples of Jena who helped shepherd Fyros through the rainbows during the Great Swarming. But over the years the Fyros have come to doubt the true role of the Karavan on Atys, who were in reality incapable of saving many thousands of homins from the kitin onslaughts. The Fyros have never been easy about these technolords who refuse to go into detail about their origins as Jena’s disciples and planetary cops. One Fyros Emperor after the other ordered information quests to find out more about the true identity of the Karavan and their activities. Precious information was gathered at great cost (this information was not lost during the Great Swarming but hidden by the Emperor and shall one day be uncovered).

Nowadays the Fyros are staunchly averse to the Karavan who place their divine law above social justice. Nevertheless, the Fyros behold the Karavan as anyone would a deadly snake remaining cautious in their dealings with them. The Fyros civilization is fragile in these times of reconstruction, it would be unwise to openly challenge the Karavan too early.

The Fyros at first cast a wary eye upon the strange creatures which they took for simple game. Indeed, their reaction on coming across their first Kamis was to hunt them down for their fur! They changed their mind however, on seeing how powerful the Kami were. And when the Karavan labeled them as evil, punishing those who would interact with them, Fyros curiosity was roused. Partly because they disliked the Karavan laying down their law, partly because they refused to condemn a phenomenon without understanding it, the Fyros state never voted any radical action against the Kamis. Nor did they further their understanding of the mysterious Kamis as they were already too busy investigating into the Dragon that, according to legend, was slumbering in the depths of Atys.

The recent friendship with the Zoraïs has brought the Fyros closer to the Kamis. Though the Fyros refuse blind adherence to their teachings, they have come to align themselves with the Kami to escape Karavan sanctions for mining and underground exploration, as well as to make pacts with the Kamis in exchange for their esteemed ‘magic’.

The Fyros have always been the agnostic souls of hominkind. These down to ‘earth’ homins need living proof before they will throw themselves into any kind of veneration. Nevertheless they never officially rejected Jena outright for fear of Karavan retribution. They simply let her fall into oblivion building their culture around a belief in the spirit of Atys. To add to this, Jena is a woman!

Today the aura surrounding Jena still remains a mystery which the Fyros are keen to resolve. They want to find out the true purpose of Jena and why the Karavan preaches her Law so resolutely i.e. what is in it for them?

Fyros elders speak of a man in a nimbus of fire that came from the sky in a glint of light. He appeared to a chosen few at the time of the great swarming and gave them direction to guide their people to safety through a rainbow. Only a few ‘witnesses’ still live to tell the tale. During the years that followed the massacre, some Fyros sages founded the Guild of Elias with other homin races to keep Tryton’s memory alive. This guild was later portrayed by the Karavan as a sect opposing the church of Jena and prohibited, many members were able to take refuge in Fyros territory where the Karavan were less present.

Today, most Fyros pay little attention to the Guild of Elias. Indeed, the one who encountered Elias did not stay long enough to tell his story before he was off again in the wilds to find a road back to the old lands. His name was Oflovak Rydon. Nevertheless the Fyros government wants the truth and shall investigate further when the time comes.

The Fyros ceaselessly endeavored to keep the conquering Matis in check in the old lands. And Matis attempts to spread their religion often led to skirmishes, especially when the Fyros began to break away from Karavan influence. The Fyros never could abide the Matis sense of justice centered around the monarchy and Karavan Law. Conflicts with the Matis lasted over 200 years coming to a head when the Matis perfidiously took the city of Karavia during the Fire of Coriolis, and made an attempt to extend their dominions to Tryker lands and so deprive the Fyros of water supplies. The subsequent treaty of Karavia brought with it a time of peace throughout the lands until the terrible kitin onslaughts of 2481.

Despite the present state of peace, various incidents in the recent past such as frontier skirmishes in 2506, or Matis persecution of Fyros in forest lands in 2508, have kept the Fyros thinking that the Matis are still the same dangerous snakes as before.

Throughout history the Fyros have often lent the Trykers a strong hand, in return the Trykers supplied water and raw materials. The two peoples complemented each other well, sharing a common passion for the simple life and great adventures. When put to it the Trykers also proved themselves to be intrepid and tenacious allies in battle. Despite this friendship, the Fyros were often exasperated at Tryker indiscipline as well as their remaining under the influence of the Karavan and Jena.

Nevertheless this privileged relationship with the Trykers continued into the new found lands. Indeed, it was the preferential Fyros-Tryker trade agreement that sparked hostilities with the Matis and led to the Autumn War in 2499. But since the Treaty of Fairhaven the Trykers have reinforced their ties with the Matis. Consequently, the Fyros have sought alliance with the Zoraïs who have proved worthy and loyal in battle, and with whom they share an allegiance to the Kamis and an aversion to the Karavan.

In the old lands the Fyros had little to do with the Zoraïs who for centuries shut themselves away in their jungle lands which, incidentally, the Fyros did try to set foot in. Since those first skirmishes with and glimpses at the mystic Zoraïs a mutual respect has existed between the two civilizations. But Zoraï relations could not develop, as the Fyros had their hands full with the Matis at their frontiers. The Zoraï response to this interracial aggression was to build a great wall to keep the war out. However, a period of peace brought Zoraï travelers out of their boundaries to the great halls of Fyre, the ancient Fyros capital, where learning was exchanged.

Since the homin exile in the Prime Roots the Fyros have learned to better understand the Zoraïs whose influence has coaxed the Fyros closer to the Kamis. The Fyros appreciate the Zoraï sense of peace and wisdom. Indeed, the Zoraïs, over the last forty years or so, have intervened a number of times to calm down spirits. What is more, the Zoraïs are not shy when it comes to fighting for freedom. Mabreka’s assistance against the Matis dictatorship in 2506 is proof, or again in the western Fyros territories against the kitins in 2512. The Fyros now consider the Zoraïs as faithful allies to be counted on in the name of the Kamis in case of foreign aggression. Though the Fyros do find the blind adherence of the Zoraïs to Kami teachings a little over the top, they feel that teaming up with them could well lead to finally understanding a certain number of Atysian mysteries.