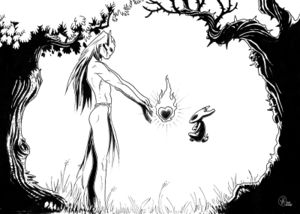 Many years ago, when hominkind had barely ventured forth from the darkness of pre-existence, a nomadic tribe was camped in the heart of the ancient forest lands. The Zoraï chieftain, whose name was Cho, was set back from the campfire under a tree in contemplation of the night sky when a strange presence enlivened the fiber in his body, warmed the liquid within his temples. He closed his eyes. He experienced an inner completion which soothed the wounds within as his eyes welled exuding the first Tears of Serenity.

He slowly opened his eyes and through the blurred vision he saw the source of his inner peace and harmony established upon a tree. The visitation blinked back at him, vanished and then reappeared in front of him. Cho bowed in an act of prostration and the entity spoke: “Kami, hungry,” and placed its hand on its chest. Instinctively realizing that the Kami was hungry of heart, Cho rose to his knees and moved his hand to his heart likewise: “Yes, Cho desires more friendship, divine Kami, how can I earn your love?”

The Kami pointed to the tree upon which it had first appeared and Cho immediately understood that the infection of goo there gave rise to the Kami’s concern. “I shall settle here, Kami, my people shall serve you and cleanse the land of the devouring sickness as you have cleansed my spirit.”

Cho spread the word to his brethren throughout the lands to bring them together around the Kami experience so they too might feel the peace and ease their anguish within. The first magnificent temple to the glory of Jena and her Kami Guardians was built on the very spot of Cho’s enlightenment and grew into Zoran, the ancient capital of the Zoraï. And let us remember Cho’s words: “It is within the grasp of every homin to feel the Tears of Serenity.”

— a Kami story, as told by Jai Bai-Wong, a Zoraï