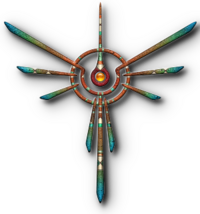 The Trykers consider the Karavan as faithful servants of Jena who stand watch over hominkind and assure their security in case the dragon rises or any other nefarious entity menaces. Over time, however, the common Tryker has come to consider them as lacking that pinch of fantasy to be real guardians from the other world. Consequently, many Trykers treat the Karavan more as overlords not to ruffle than a religious entity. This skepticism came to a head with many a Tryker wondering if they really had anything to do with Jena at all, until in 2506 when Governor Beadley Nimby stepped in line with Matis initiatives to reinforce measures ensuring adherence to Karavan teachings. Today the Trykers remain loyal to the Karavan because they protect them from Kami possession. Moreover, they are the only force on Atys that offers them a clear perspective with Jena, in whom they fervently believe.

How they see Kamis

The Trykers did not initially esteem the Kamis for their spiritual worth but rather took them as bizarre creatures with an eerie aptitude for magic. It is said that the earliest Trykers were the first favorites of the Kamis until the day the Fyros began ravishing the Bark and liberating dragon fire. As a consequence, in need of calm and healing, the Kamis grew closer to the Zoraïs. Moreover, the Karavan disciples came to forbid any contact with the creatures labelling them as evil beings. Nowadays, the Tryker authorities officially oppose relations with the Kamis because they are afraid of Trykers becoming "possessed" by the weird creatures, like the Zoraïs and, more recently, the Fyros.

Many Tryker customs are centered around the worship of Jena which is tinged with superstition. Jena gives them a sense to their lives as the Mother of Creation. They readily give her offerings through her disciples on Atys, the Karavan. Many Trykers firmly believe in the prophecy and the existence of another world from which hominkind came before birth. Trykers generally accept that the Great Swarming was Jena’s doing as a punishment for the unlawful things the homins in general had been getting up to, i.e. Fyros excavation and Zoraï worship of the Kamis.

A number of Tryker elders relate how Elias, a man all in white, appeared before them during the Great Swarming of 2481 to tell them how to guide homins to safety through a rainbow. The surviving ‘chosen ones’ would have Trykers believe that Elias is none other than the husband of Jena, in which case, it would turn out that Elias is the divine father of Atys! In Elias many Trykers have found a vent for their need for a holy father. For anyone knows it takes two to create a homin life! This notion corresponds to their utopian dream of a life where couples have babies and live happily ever after.

During the years that followed the apparition, some Tryker sages founded the Guild of Elias with homins of other races to keep his memory alive. This guild was later portrayed by the Karavan as a sect opposing the church of Jena and prohibited, though many members were able to operate underground easily in Tryker territory.

Nowadays the Guild of Elias still resides underground on Tryker territory though manages to spread the word of the coming of Elias. The Fairhaven government, following Karavan Law, has banished the guild for peace’ sake though in reality they turn a blind eye to be able to leave the door ajar just in case Elias really is the Holy Father!

Though allied in their worship of Jena, in the past the Matis have time again tried to impose their vision of society on the Tryker people so creating discord, and sometimes open conflict. Indeed, it was fear of the overbearing character of the Matis that made the Tryker Council breach the Edict of 4 Peoples and sign a preferential Trade Agreement with the Fyros in 2497, which led to hostilities over Lagoons of Loria.

Nowadays however, the Trykers feel they have earned respect from the Matis who seem to have at last come to accept they share not the same notions of social structure. The ratification of the Homin Rights Act by the Matis in 2518 and the Matis relinquishing Tryker territory in Lagoons of Loria have done much to restore a feeling of fraternity around Jena worship. Today the two peoples live in relative harmony.

In fact, to a certain extent the Matis owe the Trykers their freedom after the dictatorship of Jinovitch. Not only did the Tryker Council give Yrkanis political asylum in Fairhaven in 2508 but Still Wyler escorted him back into Matis lands to defeat Jinovitch and accede to the thrown in 2514. But that was over ten years ago and it would seem that the Matis have a short memory. Indeed, they refuse to admit they were helped by Trykers claiming it was they who helped them free Lagoons of Loria.

The Fyros where once allies who gave Trykers protection against the domineering Matis in exchange for water supplies at low cost. But the Trykers learning the art of warfare in their struggle to break the shackles of Matis slavery, thanks to the legendary Company of Loria, soon meant they could negotiate more advantageous trade agreements. Nowadays the Trykers feel they no longer need their condescending Fyros protectors of old, especially with the new feeling of fraternity with the Matis. Furthermore, the Fyros moving closer to the Kamis and the weird Zoraïs has widened the gap of religious difference.

The Trykers distrust the Zoraï mystics who openly transgress Jena Law by venerating the Kamis. What is more, during past troubles in the old lands with the Matis, the Zoraïs refused to let their forefathers cross the great Zoraï wall into the jungle lands to flee Matis swords. A similar thing happened during the Great Swarming when the Zoraïs closed their frontiers and let many thousands of Trykers perish in the jaws of the kitins. Although the Zoraïs have opened up since the exile in the Prime Roots, the Trykers still bear a grudge against the Zoraïs deliberately turning their forefathers away in their time of greatest need. More recently, it was the Zoraïs, under Fung-Tun in 2504, who first installed slavery in the new lands, which Trykers strongly oppose.

Retrieved from "https://en.wiki.ryzom.com/w/index.php?title=Tryker_Civilization&oldid=30516"
Categories:
Hidden category:
This page was last edited on 30 June 2019, at 13:52.