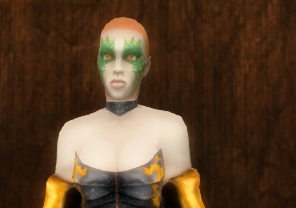 Meeting with my adoptive family (and Jenn)

When I was a very young homin, I lost myself while fleeing a wave of Kittins - so young that I do not even remember the name my parents gave me, nor their faces ... 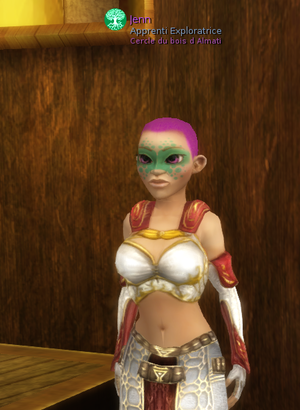 Jenn is the trykette who brought me up, I consider her as my big sister

I wandered alone days and days, before a young Trykette found me half dead with fear and hunger.

Jenn cared for me and nurtured me, and I consider her as my big sister (although I now easily make two more heads than her). We lived very close for several years, isolated, camping in the lakes with our mektoubs, feeding us young yubos, and little by little, we made some friends.

That terrible day, we were hunting and ... I had to take my legs to my neck to escape. I even thought she had been killed. At first, I searched for it, days and days, without success. Already so young, my story stammered: I had lost myself twice and found myself alone, dirty and hungry! I was still a little too young to be really autonomous, I needed friends. Matis came to me, did not ask me any questions - at first we had met about a bandit affair.

I was there for a short time in a Karavan guild. They were kind, fed me, dressed ... But they were preoccupied (in a quarrel with Kamis, about a distant Avant Poste), rarely in town, always on the road, at war ... And when I tried to join them, I was always killed on the road by these pesky ragus, who roam around the city Matis ...
I then met a tryker of passage, who gave me news of Jenn, I had not seen for ten seasons ... And I took the opportunity to travel D

Naturally, after our reunion with Jenn, I followed her to FairHaven.

Jenn was in a Tryker (but Kami!) Guild, and they spent a lot of time in Void, without her because she was a very, very bad fighter [2]. : p I do not even remember the name of his guilds (besides, I did not always understand what they said [3] ... After a few quiet years, there were changes in their organization. When they saw us, always together (and a little in our corner ...), it was spoiled ... Some did not appreciate my presence at his side? Only 'Binarabi' has always been kind to us - she has always prepared us some great stuff, both of us beautifully dressed - and at that age, we grow up very fast.
One night, coming out of Avendale's bar (this is where Jenn lives now), I was even assaulted by three Trykers full of beers - they were masked ... I came out with some bruises, Jenn was fired from his guild, a little bit brutally, I also find - we thought that these two events were related, but maybe not ... 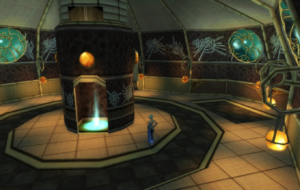 Exit from a Tryker Guild Hall: with beer, confuses entry and exit (Lucio taken by Jenn)

We must recognize that this is a period where we hang out in bars, with homins not always very recommendable, trying to get used to frequenting other homins, after such a long isolation.

We then tried to live in Yrkanis - the Matis are so proud that they made fun of Jenn and her small size - which could be annoying, but at least she did not scare them: p 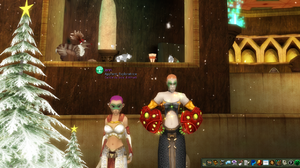 In Yrkanis and the Ranger Guild

I became Florist to make us survive, and I settled in Yrkanis (my apartment is in Zachini) [4]).
By the way, I do not like the fact that the Matis leave building guards outside, unprotected (as in lakes), too, in winter, I sometimes fire to help Antocho Sirinia warm up .. I've talked to some Matis, but of course, they do not care about the health of their Guardian, as long as he does not transmit the flu to one of their "noble offspring" ...

One day, a kind Kara accompanied us in the Majestic Garden, so that Jenn and I could train to fight the plants of the forest ...
We had heard about Ranger guild on Silan but had not seen one for ages - besides, a Tryker at the Fair Haven bar, we had told the adventures of Kiwa Lie and Djiper, but we did not really know what it meant to be a ranger - we still had relatively little traveled, we stayed around the main cities and were very ignorant.


In short... while we were both (once again) in coma, on a road to the Majestic Garden, Kiwa Lie, Djiper and Zo'ro Argh, on the road for some delivery in mektoub for the Matis, rezed us, before resuming their way - we were immediately conquered by their kindness and attention - Zo is a good doctor and especially a great scientist, he told us some stories when we just came out of coma, and Kiwa Lie comforted us with his famous cookies. As they were still in a hurry, we made an appointment to chat around a fire, on another date.

Quite quickly, we met the other members of the guild: Depyraken the Fyros, Celebtiryth, Cohme ...
And Pim, the tryker that showed me lots of drilling spots, Rajaaar with whom I got a lot trained, Krill beer in hand ... I see all these faces that I do not quote here (and some friends Zorai too), some have not returned from their excursion ... All charming, with a lot of humor - it's better to have one when you are Ranger :)


We both integrated their guild, but were still too inexperienced to begin the ranger ritual. The guild has dressed us, given new weapons (thank you Kiwa Lie for these weapons and magic adornments), and helped to mount our fame, both with the four nations, as with both religions.

Kiwa Lie also recommended us to do the rite of the wise, that of the drilling of the Lakes, as well as the one that begins at Zora. I do not really like fighting, but the guild also recommended us to train in combat. In short, Jenn and I have completed the 3 recommended rites, while working our fame (at the time, we did not know fametraker and Moniq!)
Izam head that I am ... I forgot the beginning: they have of course, started to take us from country to country, from city to city (the famous trek - we participated, even very young, various missions "sub-sub": delivery in mektoub, packages, messages, even works of art, sums of money, as well as various potions ...

That's one of the reasons we love our beloved leader, Kiwa Lie.

How I became a Ranger

I did the first part of the rite a long time ago, so I'm not very sure of some details, these notes are from memory ... I'll have to go talk to my fellow Rangers, to check if I do not I have not made big mistakes ...

But basically, here's what I remember:

Ideally, a Ranger has all (the 4 nations + Kami and Kara) fames 50. The easiest way is to raise them to 50 before starting the rite. Some missions need to have these fame at minimum values (for example, to get the cube, they must be at least 35).

The advantage of these 4 nutelas (nickname that the Rangers give to their specific means of transport) is that they are free (no dappers need to buy them, magical amber is completely free). The major disadvantage is that you have to be in the right place to use them: it's a tunnel between two places, as a special vortex. And that we still have no tp towards the Prime Roots.
These completed missions, we have in his bag an Amber Ranger

and the cube Ranger

, which shows the precepts Rangers. We also win a title "Aspirant Ranger". 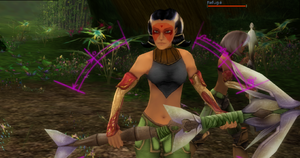 We finish with more than ten nutelas (including points in PR), and the title of the Faction : Ranger.

and on the forum, from Bitttymacod, the Mostly Spoiler Free Ranger Procedures