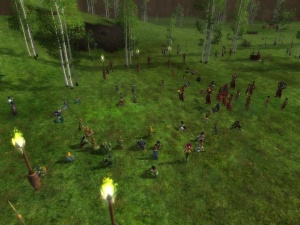 A royal wedding can not escape from politics.

The Royal Wedding of Prince Stevano, only son of King Yrkanis and Queen Lea of the Matis, took place on Medis 19, 2nd AC 2557(JY) (Saturday, 27 August).

The wedding took months of planning and was inevitably interwoven with contemporary political events, as well as it's share of rumour and subterfuge as befits a Matis royal wedding.

This event was preceded by so many introductory events that it would be impossible to give a complete history. Just the selections for a suitable bride included over half a dozen separate events. Also related where the growing tensions between the Matis and the Fyros that had resulted in the burning of Thesos, as well as the increasing Marauder attacks on the New Lands and the Matis in particular.

Summary of the event

A special location for the wedding had been set up in Knoll of Dissent, which was decorated and guarded specially for the occasion. The Matis royal family, a priest of Jena, the Matis Nobles and all the wedding guests gathered at the gates of Yrkanis and set off in a mounted procession towards the wedding location.

Unfortunately the priest had forgotten his mount and refused to run, so the procession took forever. Once they'd finally arrived at the location and everyone had taken their positions, the wedding was interrupted by a group of angry Fyros! Though all guests had been asked to dress in green, they came dressed in blood-red to protest the burning of Thesos. When they refused to quiet down their shouts of indignation, they were all either removed from the scene or had their tongues cut out.

After that the ceremony proceeded as planned, with small speeches by the Nobles serving as witnesses and a long speech by the priest of Jena that made everybody wish he'd hurry up for the second time that night. Then it was time for the celebratory fireworks show, courtesy of the Fairhaven Faire, in which 200 pieces of fireworks were shot off.

And finally there was the after-party, for which most guests did not stay anymore, and which ended abruptly when rumours emerged that King Yrkanis and Queen Lea had been kidnapped on their way back to the capital city.

Prince Stevano was officially married to Fillia Taloa. The Fyros had shown they still had fight in them. There was no evidence found of a kidnapping though two mysterious Matis were later seen on the outskirts of Fairhaven.