According to Wikipedia, The DeepL [1] Translator is a machine translation service launched in August 2017.[2]Although it has received positive press asserting that it is "more accurate" than Google Translate,[3] backed up by their own blind studies, [4] no independent scientific measurements have compared the two services.[5] DeepL converts words directly between English and ten languages: Chinese, Dutch, French, German, Italian, Japanese, Polish, Portuguese, Russian, and Spanish. Additionally, approximations of language equivalence are proposed among all of those languages, using a two-step process via an English pivot.

in August 2019 [6], developers installed the DeepL API [7] to the game "Around" channel. This allows players who are not proficient in several languages to more or less understand each other. (and yes, DeepL is not perfect!)

In 2020, an interface was also developed and implemented in the "Rocket-Chat" conversation system. (https://chat.ryzom.com/)

The following paragraphs repeat and complete, totally or partially, the contents of the pages: Chat, Chat/Translation in RC, Chat/RC channel list.

Over the flag, the original sentence is displayed

In june 2020, all is translated in Around, REGION and Uni. In Game, a single UNIVERS - in RC you'll find #pub-uni-en, #pub-uni-fr, #pub-uni-de (to close the one you don't need: use the menu on the right on the channel name). 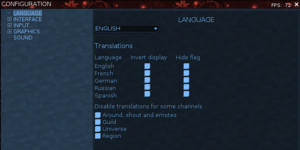 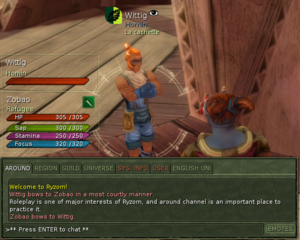 This channel displays your words to all nearby characters, within a 25 meters diameter distance. The shout command (/shout or /sh) increases this distance to 50m (and changes the text color). Conventionally, the "Around" channel is used for roleplay. The emotes are translated by the game client while conversations are translated dynamically by DeepL software.
Associated commands
The following commands have been added:

In game, the configuration

ATTENTION, VERY IMPORTANT INSTRUCTIONS !!! This automatic translation via DeepL is paid for, just like the one around IG. So please, activate it only in RF rooms where it's useful, and never in Universe or faction rooms !