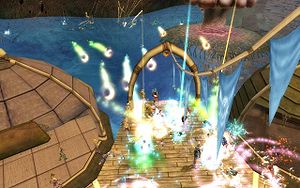 Fairhaven is attacked from the water. 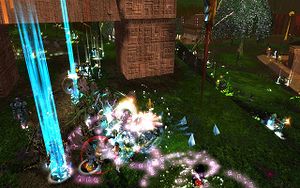 The battle for Zora.

Ultimate Provocation was an event during September 2011 that directly followed from the Event:Dark Preparations. In that event, the Marauders had supplied caravans of weapons to 4 rebel factions in the New Lands, who planned to use them to attack the 4 nations.

In this event, those attacks finally took place. Each nation was attacked in turn by it's own local rebels armed with Marauder weapons. Each invading army was co-led by Akilia Ash Storm and each had a special trick or tactic prepared.

The first attack was on the city of Pyr. Pyr is built like a fortress and it's gates have withstood many invasions already. The Coalition of Flames invaders thus had a trick to get past the gates: Some unknown magic that rendered them all invulnerable while still allowing them to attack. This allowed them to easily breach the gates and storm into the city, as the defenders could do nothing but run before their onslaught. But then, just like any invulnerability or protection aura, their power wore off after some time, allowing a small group of defenders to push through the army and overwhelm it's commanders. With their commander dead, the invaders retreated.

There are no screenshots of this attack, do you have any?

The second attack was on the city of Zora. Zora being a much more open city, the Syndicate of Despair invaders didn't need to re-use the Pyr trick to get in, as they swarmed into the city just as easily without invulnerability. Their strategy was to position their army between the Kami and Karavan altars, so as to split the arriving defenders into two and preventing them from combining into a single army. Meanwhile they kept their leaders in the back this time, so they couldn't be taken out easily like in Pyr. The defenders only managed to beat the invasion back by slowly and painstakingly whittling the invaders down until both forces of defenders managed to combine. After that it was over quickly.

Saturday, 17 September, 2011.
Attacker: Council of Dissent[3]
Target: Majestic Garden
Tactic: Surprise attack on a town while the defenders wait at the capital.

The third attack was on the city of Yrkanis. At least, that's what everybody expected. Yrkanis was also a very open city and easy enough to storm, and in fact open enough that the strategy used in Zora would not work here as there were no corridors to blockade. So as the army of defenders was already waiting in Yrkanis, the Council of Dissent army moved around and instead attacked Avalae, the Matis town furthest from Yrkanis, by surprise. By the time word of the attack had reached the defenders in Yrkanis and they had run all the way to Avalae, the invaders had already killed every last inhabitant. The defenders managed to destroy the invading army in Avalae before they could do any more damage, but it was too late for the town.

The final attack was on every city in Liberty Lake. The Tryker cities are floating platforms with few land bridges, and so perhaps even more difficult to invade than Pyr. But the Cynics of Liberty invaders shocked the Tryker defenders by showing that they had perfected the art of sea battle and amphibious assault. They attacked all 3 outlying villages at once, and with their advantages nullified the defenders could only defend one town at a time. Crystabell was immediately secured, but half of Avendale had been slaughtered before the invaders there could be repelled, and Windermeer's population was completely killed before the defenders even arrived. The invaders' plan to attack Fairhaven while the defenders were swimming between towns failed, however, as their force was spotted in time for the defenders to return to Fairhaven and repel the attack before any invaders could enter the city. 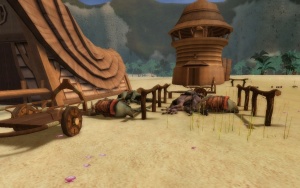 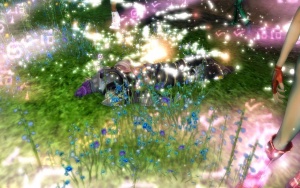 The Syndicate of Despair commander falls.

Coalition of Flames attack on Pyr

Syndicate of Despair attack on Zora

Repelled at the cost of many city guards.

Council of Dissent attack on Avalae

Invaders successful in taking the town and killing all it's inhabitants, but fail to hold onto it.

Cynics of Liberty attack on Avendale

Repelled at the cost of half the town's inhabitants.

Cynics of Liberty attack on Windermeer

Invaders successful in taking the town and killing all it's inhabitants, but fail to hold onto it.

Cynics of Liberty attack on Fairhaven

Retrieved from "https://en.wiki.ryzom.com/w/index.php?title=Event:Ultimate_Provocation&oldid=11538"
Category:
This page was last edited on 23 September 2011, at 01:43.