Thanks to check... (the French page has much more help - translation needed). 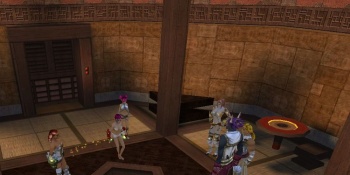 Invite your friends into your apartment for a party!

The player housing in Ryzom consists of apartments. Every player character can own one single apartment in a city. They are then able to furniture and decorate their apartment and invite other players in. New and unique apartment decorations are often given out as event rewards. Additionally, apartments also serve as extra personal storage space.

Guilds can also buy a sort of apartment for the entire guild: a guild hall. However guild halls only serve as storage space and don't have the additional functionality of apartments; they can't be decorated and players outside the guild cannot be invited in (though all guild members automatically have access).

A newly bought appartment will be empty.

Apartments have a personal storage space that only the character who owns the apartment can access. Even if you invite other players into your apartment, they cannot access or even see your apartment inventory space.

The apartment inventory space has a maximum capacity of 2000 bulk, which is more than 3 packers can hold, or 1000 slots.

This section contains a list of the items you can acquire for your apartment.

It is possible to buy the apartment items of other races by entering an apartment of that race. If a friend invites you into their Tryker apartment, for example, you can buy Tryker items while inside their apartment even if your own apartment is of a different race. But these items will be useless to you in such a case because they can only be placed inside a Tryker apartment.

There are also special apartment items which can be placed in apartments of any race. These items are usually given out at events and cannot be bought or sold.

Fyros Furniture: These items can only be placed in a Fyros apartment.

Matis Furniture: These items can only be placed in a Matis apartment.

Tryker Furniture: These items can only be placed in a Tryker apartment.

Zoraï Furniture: These items can only be placed in a Zoraï apartment.

Halloween 2010 Items: These items can't be bought, they were given out as event rewards during the Halloween 2010 event. They can be placed in any apartment. With the exception of the Wheel of Light, which uses the table slot, these items all share the same 9 slots which aren't used by any normal furniture (though not every item can be put in every slot).

Atysmas Items: These items can't be bought, they were given out as event rewards during the Atysmas 2010 event. They can be placed in any apartment. They were the first apartment items that did not use slots for placement, but could be placed anywhere in your apartment and in any angle.

All-together, the items can be used to build a miniature Atysmas village. 4 of the items are specifically Atysmas items.

The remaining 19 items are simply miniature versions of the kind of objects you find around towns and cities, hence no pictures are included.

Instead, here is one picture of a complete village set up that uses 1 of every item.

This article has not yet been altered to reflect the latest updates to the apartment system.
Some parts of it may be out of date (2011).

The Mysteries of Atys (X-files) • The Cave