The Guild of Phaedreas Tears holds its center in Yrkanis near the Karavan Altar. It is open to all Homins of good well who are willing to abjure violence against other Homins and to aid those in need regardless of their beliefs. The Guild claims own allegiance to be neutral to factions and nations, its members have no religion. Some of the Guild members seek to become Rangers, but that is not required.

The Guild of Phaedreas Tears is currently lead by Guild leader Itzy who received distinguished responsibility from Mac'Od Bittty.

Guild members are disallowed to fight with other homins; however, we know 2 OP incidents after Second Swarm, where the Guild was involved. The Guild is officially using English in communication with others, but currently also Spanish, German and French are used in guild chat.

Phaedrea's Tears is well alive and looking for a few good members. We are Nation and Faction Neutral, help all who have need, and do not fight other homins. We honor Tyneetryk, of blessed memory, in that attitude. We expect members to work towards maximum Fame for all Nations and Factions. Working to become a Ranger Aspirant is desirable but not required. Being helpful to other homins, regardless of their affiliation, is expected, and use of guild resources to that end is encouraged. If this sounds good to you, contact any member of Phaedrea's Tears and we can discuss it.

We offer assistance to any who ask it, but we assist, we do not lift up those who will not work to lift themselves. If you want to join us, you can look forward to a long growth and work at your own pace to develop.

Phaedrea arrived to look upon her young friends, noticed them leaving, and although joyful, wept, for such was the warmth of her heart for all Matis kind. And so in honour of this lady, the band of Matis bound in friendship and love for Phaedrea created the Guild that would be known henceforth as Phaedrea’s Tears … Each Tear being a Matis soul, to defend Yrkanis against evil, in all its forms.

Such is the essence of Tears. If you love King Yrkanis and the Lady Phaedrea, if you hold friendship dear above all else, then you already are a Tear at true heart. You know Life Is Beautiful, because you share it unasked. When the clouds grow dark and the rain sets in, your face turns high, to the sky. When they skitter and run before a strong wind, you'll grab a javing, by its feet, try to fly. Every snowfall makes a snowball, when you're cold you make a huddle. When you hear a plaintive cry you will, every time, reply. Before you know it, you've made another friend.

Such is the light of Jena which glows in every young homin, never let it blow out.

We came to the lush Verdant Heights to regrow the beautiful civilization destroyed by the kitin onslaught, and there is much to be relearnt. A Tear is expected to find their own place in this endeavour and help others to find theirs. Nothing is learned so well as that which a homin discovers for themselves, many new discoveries have been made when a fresh pair of eyes has looked over old ground.

A Tear must uphold the good name of the guild and help, if they can, whenever asked. Once a Tear has paid their respects to the Green Seeds, and as soon as they are able, they should be proud to perform their civic duty keeping the pathways of Majestic Gardens free from ragus and gingos. Weapons, amplifying gloves and picks should not be wielded in the guildhall, and footwear must be removed before entering; crafting tools may be used with caution, well away from the polished furnishings.

Phaedreas Tears guild was founded on October 16, 2004. its slogan was Devoted to Yrkanis and the regrowth of an enlightened civilization. That means we emerged before the Second Swarm and survive it. We exist since Aniro’s times (server) and the historical archives that remain are full of dust... obviously we need a librarian... those archives outline our first Matis - Karavan alignment with this words:

Phaedrea's Tears is a small Jenite guild open to polite applications from homins of any race, even those not Matis. All Tears must swear to defend Yrkanis, king and capital, in word and in deed, so long as they shall live. Matis citizenship is not necessary but certainly seemly, allegiance to the Karavan is respected not expected…

The oldest Leader we can find in our archives was Edge (his real name has been erased by the time... and the server).

Edge was a prankster who enjoyed motivating by making riddles and pranks on our members. In those times we owned some Outposts and took part in PvP fights, we were also allies of Elders of Atys supporting them in the defense of their OP.

During those times, Jamela, Joneyentee, Odo, Razz, Sunrays, Six, Sunny, Tally, Thomas, Ulani and Znathara were part of the High Officers, Officers or members. Of them only Joneyentee, a High Officer, was frequently accompanying us until about 2016.

Edge transferred the leadership to Jamela and this one to Thomas who said:

Tears as a guild have never had any particular focus on PvP because such conflict tends to go against both our ethos of friendly community building, and the freedom of individual Tears to follow their own paths. Even though the Trading Post was given to us to hold for a while, it is still a guild PvP trophy.

That reflects the neutral seed present since our inception despite our alignment. Also we can read the following:

Tears have helped me for the entire time I have been on Atys. I still have my own internal doubts about the Kami and the Karavan, whether either of them have the best interests of homin-kind at heart, but I know that the Tears I have known have the interests of their fellows high.

The chronological record seems to have been lost between Thomas' Leadership and Joneyentee's...

After Second Swarm, Joneyentee maintained the guild as leader and the guild took its path to neutrality[3], we could say that as in all of Atys, a New Beginning occurred.

The neutral and anti-PvP stance of the Guild were set by Tyneetryk (around February 6th 2012[4]),

Long ago the warriors of Phaedrea rose to fight the oppression of the Kitins. Much has changed since then and now the guild is primarily focused in aiding the newly arrived refugees on Silan and the Mainland to find a place for themselves on Atys.

Phaedrea's Tears is open to players with various interests. It boasts a friendly and supportive environment. Tears is the only actively recruiting guild which is completely neutral and all of the current active members are also completely neutral. The guild does not take sides in the Karavan-Kami conflict, however individual members are allowed to participate in PvP as they wish.

The guild does not actively invite or cajole players into joining, but we give unconditional help and assistance to whoever needs it and let them choose to join if they wish.

We are also active on Silan but we have a policy of refusing guild requests until a player has established a character on the mainland. We believe that players should have a chance to see the various guilds, discover what each one has to offer and so make an informed decision.

As already stated, the guild's main goal is to help new players on Atys, both on Silan and the Mainland. Roleplay is welcome but not mandatory.

Just before Tyneetryk's regrettable departure, Ferishan was appointed as leader, and worthily upheld the banners of our guild, raised spirits and established strong bonds to weather the loss and continue moving forward in our paths as Tears. The neutral and anti-PvP stance was kept by Ferishan and Mac'Od Bittty.

The well-remembered Bittty Mc'Od continued on that path, after Ferishan, establishing greater bonds of friendship with all the guilds of Atys and with each homin in particular. 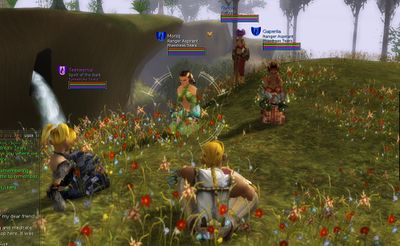 Times after Tyneetryk were years of holding the new spirit of the Guild. Teeneemai has established Tyneetryk's Tears to hold the beloved leader name and the Guild itself focus more on members quality than quantity. The leadership of Mac'Od Bittty has built small but solid members base that hold the legacy of Tyneetryk. 15 years old and first [5] of true neutral guilds in Atys.

...Much has changed since then. Now the guild is primarily focused in aiding the newly arrived refugees on Silan and the Mainland to find a place for themselves on Atys. Phaedrea's Tears is open to all homins who pledge to shun violence against other homins and keep a neutral attitude towards all Nations and both Powers. The guildhall is in Yrkanis for reasons related to our history.

Bittty decided to devote himself to writing his memoirs and ceded leadership to Itzy, who today leads us… are now 17 years and Phaedreas Tears is live and living on Atys…

Legendary Bubbason, wearing our insignia as an Honorary Member celebrating our XVII Anniversary.

This neutral guild has many Rangers in its ranks, who are proud to wear the turquoise uniform and carry the blue badge with a teardrop.

We don't know the future, but even if the guild turns towards an all-Ranger orientation… 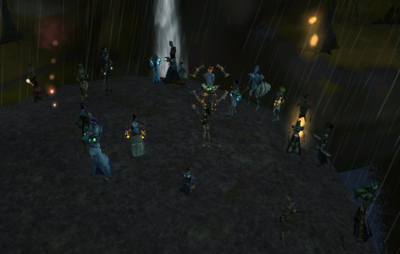 Virginia Falls, XVII Anniversary.
Phaedreas Tears has been, is and will be a reference… We help and we will help any homin in need.
Last version 2022-10-18•ᐒ
Retrieved from "https://en.wiki.ryzom.com/w/index.php?title=Guild:Phaedreas_Tears&oldid=51267"
Category:
This page was last edited on 18 October 2022, at 14:43.