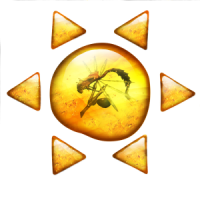 The Zoraïs once saw the Karavan as disciples of Jena, the Matis and Tryker goddess whom they now consider as a deity borne of the imaginations of less spiritual homins. The Zoraïs have abandoned all alliance with the Karavan believing them too cold and soulless to be worthy of their veneration. Incidentally, the Zoraïs were at the root of the first open Kami-Karavan conflict. One day the Kamis seriously "cautioned" a Karavan expedition for attempting to destroy a Zoraï village as punishment for refusing to carry out a Karavan order. This conflict left the Karavan in the knowledge that they were not the only major force on Atys!

The Zoraïs are reassured in their belief that the Karavan are not of divine substance as many were actually killed by kitins during the Great Swarming. The Karavan are nonetheless still considered as a dangerous entity and many Zoraïs sense they are deliberately stirring up hostilities with the Kamis, which can only denote some imminent event.

The Zoraïs believe that the Kamis are the living embodiment of pure energy (Ma-Duk, see below) on Atys sent to stand vigil over the plant kingdom and ensure that no one may destabilize the fragile equilibrium of the planet. The Zoraïs believe themselves to be the chosen children of the Kamis because among the homins it is they who have most retained the pure energy. Kami worship has become part and parcel of Zoraï existence. Indeed, no sooner had they surfaced from the Prime Roots after the Great Swarming than Hoï Cho instituted a week of fasting to commemorate the period which left them bereft of Kami enlightenment.

Ma-Duk (The Life Giver): The Zoraïs worship a superior life energy which created Atys, Ma-Duk. They do not see it as a superior hominoid being but as an energetic entity free of body that presides over a kind of nirvana. They readily give offerings through favors done to the disciples on Atys, the Kamis. The Zoraïs believe in the existence of another world, indeed of other worlds where homins may accede as stepping stones to finally be fit to enter eternal all-knowing bliss. In the ancient lands they built places of high magnetism where homins could find tranquility and energy resource to help them through life on Atys.

Since the encounters between Hoï-Cho and Ma-Duk which began in 2483, Jena no longer has any place in Zoraï culture. They consider her as a deity borne of the imaginations of less spiritual Atysians.

Many Zoraïs believe the apparition of Elias in 2481 to be a manifestation of a Great Kami. He appeared in a halo of light some three generations ago to a chosen few to tell them how to lead homins from kitin infested lands through a rainbow to the relative safety of the Prime Roots of faraway lands. During the years that followed, some Zoraï sages founded the Guild of Elias with other homin races to keep his memory alive. This guild was later portrayed by the Karavan as a sect opposing the church of Jena and prohibited, many members were able to take refuge in Zoraï territory where the Karavan were least present.

Members of the Guild of Elias still reside in Zoraï territory. The Zora government is against the guild as it creates discord within the long standing Zoraï social system. This guild which operates "underground" has gathered testimonies of every encounter with the strange hominoid entity.

The Zoraïs at first saw the Matis as barbarous tribes as they witnessed them hunt down and kill every one of the primitive primates known as the momos. Outraged and horrified at such a display of barbarity the Zoraïs began the construction of their great wall which ran across the lands of the Matis and the Trykers to the north of their jungles lands. But with news of a peace treaty between homin races, rare Zoraï travellers began venturing out of their lands to see with amazement the great cities and bastions of the Matis.

Despite Matis love for the Karavan the Zoraïs consider the Matis with a certain respect for their refined knowledge of plant life. The Zoraïs are nonetheless staunchly against the Karavan and are prepared to try every means to bring the Matis around to the Kami way of living. Indeed, the present Matis king, Yrkanis, was given refuge in Zora in 2509 and helped to muster an army to depose the ultra-Karavan monarchy and install a more tolerant government. This, for the Zoraïs , was the first step to coax the Matis into the Kami world. In accordance with their agreement of 2509, trade between Matis and Zoraïs has resumed. However, it would seem there is growing opposition against Yrkanis within his own kingdom. The Zoraïs remain vigilant.

In the early years the Zoraïs saw the Fyros as barbarous primates ready the cut the life out of a body before the soul was prepared to meet the maker. But with the peace treaty of Karavia in 2436, some rare Zoraïs ventured to the desert lands where exchanges of knowledge were made in the great halls of learning of the capital city of Fyre. Along with their wisdom the Zoraïs brought word of Kami enlightenment to which the Fyros were receptive.

Since the coming together in the Prime Roots after the Great Swarming, the Fyros are considered to be making good progress in their spiritual development, having clearly chosen the way of the Kamis.

Today the Zoraïs consider the Fyros as brash but valiant warriors to be relied on. And indeed, their new alliance, built around the Kamis, has been put to the test many times over recent years and each time their friendship has grown stronger. They fought together against the Matis dictatorship in 2506. In 2512 the two peoples came together to fight the kitins that were mustering on lands bordering the two territories in Knot of Dementia. The present Zoraï leader, Mabreka, was given refuge at Pyr during the totalitarian reign of Fung-Tun in 2504.

The Zoraïs have never had much regard for the trivial Trykers who were seen to treat the Kamis with frivolity. They feel their minds are not mature enough to be fit for a place in the higher spheres after life on Atys, indeed they have a long way to go on the road to spiritual enlightenment. When the Matis invaded Trykoth in the old lands, the Zoraïs kept behind their walls with their gates closed despite Matis warriors at their heels. They felt the Trykers’ spirit was too wayward and no doubt unworthy of receiving Zoraï aide in the face of the mighty Matis knights. Again during the Great Swarming the Zoraïs kept their gates locked though this time their walls crumbled under the brunt of the Kitin onslaughts.

Today, the Zoraïs have learnt to tolerate the Tryker devotion of sensuous enjoyment, though still have little esteem for their fickle souls. Furthermore, the Trykers venerate the Karavan who are hostile to the Kamis.

Retrieved from "https://en.wiki.ryzom.com/w/index.php?title=Zoraï_Civilization&oldid=28438"
Categories:
Hidden category:
This page was last edited on 8 March 2019, at 15:10.