The Gibads are a tribe made up of highly intelligent gibbaï. It is unknown when the tribe was founded, although it is speculated that it was around 2490 JE when Zo-Kian, a village built by a group of Zoraï hunters, was completely destroyed by unknown creatures. The current location of the tribe is in the south of Void, Witherings, near the border of Maiden Grove. The Gibads, like their Zoraï cousins, follow the Kami, though they don't receive an ambassador for their camp.

The Gibads have a number of physical traits seperating them from their primitive cousins the gibbaï. First and foremost is the fur colouration; Gibads have a rusty red fur whereas gibbaï in almost all cases have black fur, there are exceptions though on exceptional specimens like Gibbakin and Gibbakya, which has fur similar to that of the Gibads. Other less notable physical features are the more prominent whiskers and larger eyes of the Gibads over those of the gibbaï.

2493
First sightings of higher gibbaïs in region of the Void.

Though this was the first time the Gibads were identified, it is assumed the first contact with the Gibads was a few years earlier when the hunter village of Zo-Kian was destroyed by 'unknown creatures'. 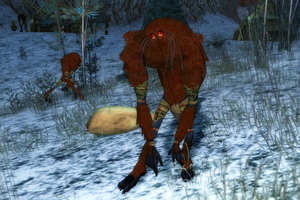 The gibads do not wear clothing which defines their tribe as normal homin tribes do, they do however wear beige clothes, resembling the light and medium armour crafted by the Zoraï.