The portal of the Great Library of Atys

The scientific communities of Atys

Here you will find what is related to science, technology and the arts. Each nation has developed its own knowledge-gathering, standards-setting and research management organizations.
Last version 2020-10-06•ᐒ

The Sage : I am the senior fellow of the keepers of knowledge around here, The knowledge contained in the amber cubes of the Chest of Wisdom is truly invaluable, for this reason, they are to be given out with great care Homins wishing to improve their knowledge must undertake rites to prove they are worthy of such a reward. Being a sage, I am an initiator of some of these rites.

A long time ago, following a terrible blaze which ravaged their library, homin sages put their heads together to come up with a new medium to preserve their knowledge [1]; something more reliable than a scroll, all too sensitive to the ravages of time and the voracity of flames. They thus explored the properties of amber: Crafters and magicians combined their talents to fashion amber cubes inside which knowledge could be magically stored. A deal more robust and less cumbersome than parchments or tablets, these cubes also had the advantage of being understandable by all homin peoples thanks to the magic nature of their inscriptions - in those times homins used different dialects. Furthermore, it was found that duplcating a cube was less fastidious than copying a manuscript, so enabling knowledge to be conveyed more easily.

A great many cubes were created... but the Great Swarming of Kitins and the period of exile in the Prime Roots led to their dispersion. Cubes were lost during the homin flight, and others were hidden to keep them from destruction or unlawful designs. In this way, much knowledge became forgotten. From the outset of the reconstruction of their civilzations, homins have been searching high and low to recover these ancient cubes each one of which may unveil a fragment of that forgotten past.

The process allowing the creation and the duplication of cubes of amber is still known by homins today, though few they may be. Generally speaking, only old and eminent scholars possess knowledge of this process and it is they who conserve the cubes. They are willing, however, to share the knowledge contained in the cubes with those whom they deem honorable: a homin who is keen to learn by gathering cubes may speak to them. Ancient cubes may be unearthed throughout Atys, however more often than not these cubes have to be reactivated by an homin initiated in the art. The very old cubes are evidently regarded as rare and precious treasures.


When they are not conserved in an amber chest, over time the cubes lose their energy, only an initiated few may recharge them. A long time ago, a chest was sculpted in amber to preserve all the existing cubes, needless to say, its size was legendary. This great chest came to be known as the Chest of Wisdom because of the amount of knowledge it contained. Homins eager to gather cubes have their own chest of wisdom, which is none other than a smaller replica of the first great chest.

The color of an amber cube often indicates its age, and therefore may also provide an indication as to the value of the information contained inside. Yellow cubes are recent, no more than a few decades old, and are the most common, Red cubes are older and can be centuries old. Purple cubes are the most ancient and consequently the most sought after.

Most cubes bear the stamp of the civilization that created them. It is therefore possible to come across cubes with seals corresponding to the Matis, Zorais, Fyros or the Trykers. Certain cubes, such as those of tribes, often do not bear a seal. As for the Karavan and the Kamis, they have their own mysterious system of recording knowledge, though more often than not they use cubes of amber to convey knowledge to homins. 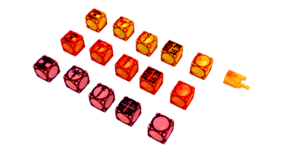 The art of magic was taught long ago to the Homins by the KamiS. Lao reasons why these creatures with immense powers had to teach part of it remain the subject of controversy among the initiates, including Matis, but the most commonly accepted is related to the fight against Goo.

Magic is the art of manipulating sap according to a particular initiation and ancestral knowledge. It allows you to imprint your will on the vital energy that irrigates everything in Atys, and thus modify appearance, nature or behavior .

See more about the dedicated portal .