It has been suggested that this article should be rewritten or updated, because: Merge in playable marauder faction!.

Not too much is known about the Marauders and what we do know mostly comes from what the Marauders themselves have chosen to reveal, so may not even be true. It is certain that their numbers are large, however, possibly larger than those of any other known homin faction.

Only a handful of Marauders are known to us by name. The Marauders have had many agents and spies in the New Lands, among these is counted Nung Hirongi, traitor of the Cho dynasty. 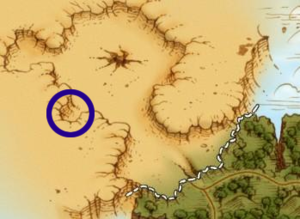 Location of the Marauder Camp in Hidden Source. 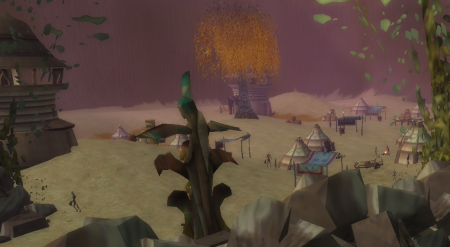 The Marauders are grouped in clans, with each clan being autonomous. Despite each clan's autonomy a warlord rules over all the clans. The current warlord of the Marauders is known as Melkiar the Black Varinx. He has a daughter called Akilia Ash Storm who also holds considerable power within the Marauders.

The clan that first appeared in the New Lands and made the first attacks on the homin nations was known as the Throat Cutter Clan. It is unknown if the many subsequent attacks were still by the same clan or by different clans. We do know the most recent attack on the New Lands was carried out by the Clan of Ashes, which presumably is Akilia's clan.

It is unknown how large the clans are or how many clans there are, making it impossible to guess the number of Marauders still out there.

It has been suggested that the Marauders have developed a language of their own, whether this is true or not has yet to be seen. What is certain though is that most Marauders speak with a strong accent which cannot be traced back to any found currently in the New Lands.

Marauders claim to be free of any and all influences from both the Kami and the Karavan, and look down with contempt upon those who revere them as divine. 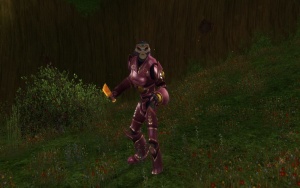 Pei-Ziao shows us the Marauder armour.

The Marauders are shrouded in mystery and it is often said that they possess strange technology that has never been seen in the New Lands. Certainly, the armour worn by some of the Marauder leaders was not known in the New Lands until they brought it there. More recently they've also been shown to have access to perfect crafting materials that are completely without flaw.

The Marauders also have shown to have superior encrypting technologies and the ability to teleport without aid from the Kami or Karavan.

It is believed that a mysterious substance referred to as matoxia is somehow tied to Marauder technology. The Marauders also seem to have no qualms about using Goo in their weaponry. 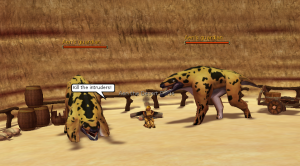 Aen likes to have varinx fight for her.

Far from relying on their superior weapons to win, the Marauders employ every tactic in the book in their efforts to conquer the New Lands, including large amount of subterfuge. For the homin nations, they are a far more devious adversary than the Kitin, whose strength usually lies solely in their numbers. The strategies the Marauders have used against the nations of the New Lands include:

Though initially they simply attacked with a full force of their own, since being defeated on that first attack the Marauders have been fond of letting others do the fighting for them. Occasionally this strategy turns against them as one of their 'allies' ends up betraying them. However no Marauder has ever been known to change sides. 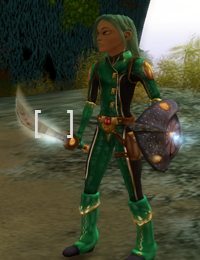 Over time, the Marauders have developed their own language: Marund.

Most of us are survivors of the Great Swarming. We have struggled to take a foothold in the New Lands and now are ready to take our place. Others, refugees to the New Lands, have recently joined our ranks being disappointed by both religious factions and nations. We have our own laws and answer only to ourselves.

Main article: Being a Marauder

A player who has their fame with all 4 nations below -25 gets access to a 'Marauder' chat channel and gets a Marauder fame icon if they engage in faction PvP.

However, they are clearly not members of the NPC faction called the Marauders as it is described on this page. It is possible 'Marauder' is just a term used by the people of the New Lands to describe anyone who is anti-nation, similar to the original use of the term 'barbarian'.

On the other hand, a Marauder city has been announced[1], and it seems the game is moving towards giving players the opportunity to become full-fledged Marauders. Time will tell.