The Assassination of Loria

As expected, the target has left the royal palace in the middle of the night, quickly leaving the city of Matia to head south. As agreed, we made a cautious advance; we were warned repeatedly to not underestimate her abilities.
It has been a year since Loria started to taunt the forces of the Duke di Tylini organizing numerous attacks and releasing more and more slaves, who then swelled her ranks. Today, this dark farce would stop, and I was finally able to establish an enduring position for myself amongst the Matis.
As Loria broke through into the forest, my Matis companion silently signaled to me: we had to wait an hour before moving to the ambush site by another route, so that we could be waiting for them. Having monitored them for some weeks, we knew her path perfectly, and even her shortcut into the Prime Roots was now well known. More than that, traps had been set in the hiding place that she had made in case of any problems.
Under the visor of his parok helm, Rocho whispered softly into a Karavan communicator to prevent the others from leaving the target. Although I had my doubts about the identity of our sponsors on the Tryker side, those on the Matis side must be extremely powerful to have two of these very holy relics.
The hour had passed and our mektoub now raced through the forest, toward the shafts that lead down into the Prime Roots. This entry was not as convenient as those with a vortex, and despite their prehensile feet we left our mounts on the surface, descending along a vine recently moved by the weight of a petite homin. She had definitely been past here; the net was tightening around her.
When we finally caught up with her, the others had already surrounded her in a narrow passage that she generally used to avoid being detected by predators. Although she appeared ready for combat, the confusion on her face was plain to see when she realized that there were Trykers amongst her assailants. Our chief, Pebre Freldo, simply announced to her that it was time to pay for opposing the great ones of this world, the craftsmen of Jena's design, and that her soul would rot forever for her many sins. 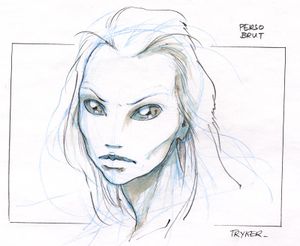 When we attacked, we could truly see what heroes are made of. She was an exceptional fighter, but refused to land fatal blows on the Trykers among us. That earned her a helping pike in the side, but by some miracle she managed to escape the ambush. After all, it was her excellence at escaping that had led us to this in the first place. Leaping astride a nearby mektoub that didn't even have a saddle, she quickly outdistanced us.
As might be expected, she fled to her hiding place; with her injury she could not leave the Prime Roots as the smell of blood would attract all kinds of predators from miles around. Pebre ordered everyone to put filters in our helmets, and to start heading to Loria's refuge.
When we arrived, she was crawling out towards the exit, trying to escape the cloud of gas our trap had released. Even the great Loria could not survive the deathly vapors of the largest Prime Roots yelks after all. We all looked on as she painfully crawled, unable to even leave the harmful green tendrils; finally, Pebre declared her practically dead.
While everyone else had turned away and left her to her fate, I took a last look at the one who had caused us so much trouble. Lifting her head, she appeared to be transfixed by a ray of light that had broken through the darkness of the Prime Roots. Finally, she looked at me, and asked with her last breath: ... Why ...?

Portal of the Atys Chronicles • Before 2480