The Daïsha Stanza, a legend from the time of the reign of the Great Wise Lin Cho.

During the authority of Lin Cho, the Fyros carried out an incursion on Zoran, the Zoraï ancient capital. The Fyros were successfully pushed back and the great wall thereon was extended to encompass all frontiers with barbarian dominions. Thanks to the impressive observation towers, the city bore hardly any damage though the little damage that was inflicted sunk like an arrow into he heart of Zoraï culture. Indeed, the fire blasting of the national library – whose holdings included many centuries of scriptures inscribed on mektoub parchment – made the grand council of sages realize the fragility and the bulk of their files of learning.

High magicians came together and a stanza was devised to reduce the volume of the parchments into spheroids thus allowing greater expanses of knowledge to be transported more easily. But there was a drawback, resisting properties were lost or weakened in the process and a container was needed to protect the spheres from the ravages of time and fire.

So it came to pass that, by order of the high authority of Lin Cho, master crafters throughout the land were summoned in the event of a competition to find a new non-perishable means of storing the wisdom of ages.

By and by the day approached and villages and towns all over the land were sending their prime candidates into the village of Taï-Toon where the new library was to be set up. About fifty master crafters in all with their apprentices were soon adding their final inspirations to their fabulous fabrications amid much ceremony. There were finely carved magical boxes, urns and jars of every shape, color and size made for the storage of the spheres of knowledge.

One young crafter by the name of Hari Daïsha, from the remote village of Din-Tin, had opted for a more rustic style and had ingeniously hollowed out a bodoc horn so that it could contain up to five spheres of knowledge. On the eve of the grand day, squatting outside his tent, Hari was busy applying the final coat of his fire proof potion to the horn when a well known city crafter stopped by and cast and amused eye.

- “What is this, yama (young homin)? The musicians’ quarters are nearer the exhibition grounds, up near the podium!"

- "No, Master Seng, this horn is my competition piece. See, it closes the spheres of knowledge in with this watertight flap, it is resistant to fire and, best of all, can easily be dissimulated in nature in case barbarians come looking."

- "Amazing! A stack of bodoc horns, how deceiving!" jibed Seng who then perched a heavy hand on the young crafter's shoulder. "Heed my words, sages will always enjoy a pretty design. If you want them to cast so much as an inquisitive eye at your effort, I'd brighten up the coarse exterior!" With that Seng continued on proudly to his own camp where his chela was giving a last polish to a magnificent box of amber.

The young Zoraï looked down at the crude bodoc-horn receptacle. “Mmm, old Seng may be right, tomorrow the jury must study many innovations and then pronounce their verdict before the great assembly. I’d better add a little extra sheen to it to make it stand out a bit! Huh, I may not be able to afford amber but there’s plenty of sap in the river yonder.”

Jungle Night was closing in as Hari, fatigued and irritated at Seng’s chaff, squatted down to his chore of boiling down some sap to produce a firm jelly which he could then use to rub into the receptacle to give it a green sheen. The night lamp attracted all the fireflies of the night, Hari grumbled at yet another that danced between his eyes. “Ah, get lost before I zap ya!" he groused waving a sap sodden hand. But the firefly was determined to make a nuisance of itself. "Right, you asked for it!" Hari took a scoop of sap, rolled it into a ball, thought up a binding spell off the top of his head and zapped the insect which fell to the ground in a prison of eternity. “Wow!" exclaimed Hari, "Look at that! I’ve bound it in sap!"

On retrieving the translucent green ball of sap, he was able to marvel at the intricate anatomy of the creature and behold the full beauty of its highlighted wings that no homin had ever seen before. "Any sage would give his book of stanzas for that," he thought, and an idea was borne into his head. All night long he practiced zapping and dezapping fireflies to perfect the power words of the stanza until at last, in the small hours of the morning, a firefly was able to slip its tarsi from its spherical prison and flew away totally unscathed.

Early next morning, the hustle and bustle of competitors getting ready and making their way to the parade ground soon gave way to the stillness of the vacant tents. Vacant, all except for one. Hari, still under the effects of the sap fumes and a hard night's work, had fallen back into deep sleep and slumbered on and on.

It was the distant sound of horns signaling that the judges had reached their decision that finally stirred him from his dream. No sooner had he opened an eye than he was running with his beads of sap over to the podium where none other than Master Seng was proudly holding up his box for all to see. "Amber," he intoned, "will last forever and this box will give lifelong protection to anything stored inside it." He then turned, according to tradition, to give the box to the master sage in exchange for the winning medal.

- "Master Seng," began the great sage in his ceremonial voice, "I proudly pres…"

- "Wait!” piped in Hari, all out of breath and squeezing himself out from the front row of spectators. “Your reverence, my piece has yet to be judged.”

- “My lord, if I may,” interrupted Seng, who then pulled the sage aside. “I recognize this lad, he has an uncommon mind, one of a fool or of a genius. To discourage his efforts now, could mean killing a bright bird of fancy in the egg later.”

- “Yes, Seng, I see your point, it takes every twist of nature to make the world whole,” agreed the sage then motioned to Hari who brought out a bead of sap form his bodoc horn and held it up to the sun for all to see. The sage examined the sap-bound fly not without wonder.

- “It’s a new process, your reverence.” Then, with a wave of the other hand and an utterance, Hari conjured his reversing stanza releasing the firefly which took to the air amid the “oos” and “ahhhs” of the surrounding spectators. “Is there anything more fragile than a firefly?”

- “Very interesting,” conceded the sage, “but sap won’t resist against the first drop of rain let alone the ravages of time!"

- "No, but amber will," put in Master Seng stepping forward to Hari offering his beautiful creation in one hand and a sphere in the other. "Come, young homin, take the amber you need from this box and show us what your magic can do with this sphere of knowledge. If you succeed, you can pay me back with your winnings!” chuckled the great crafter.

In the twinkling of an eye, the young crafter had dissolved a portion of amber which he then directed to seal the sphere of knowledge. The whole crowd clapped and cheered as the sage, muted by the clamor of praise, took young homin by the arm and raised it in the air.

The balls of amber were thereafter perfected into cubes for easy storage with the help of Seng, who, incidentally, also made the first great Chest of Wisdom to store them in. To add security, the council of Sages added a special binding seal to ensure that only initiated fellows could handle the precious contents.

— as written by an anonymous Zoraï scribe 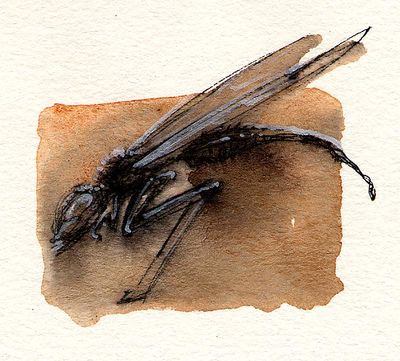