A certain document has come into the hands of our social reporter today, purporting to be the social dairy of the Lady Chiabre of the Matis court [1]. Whether this is genuine or not, we will leave you to judge...

Off to the Palace today for a state banquet. I was exceedingly nice to Rodi De Varello, who I was seated next to – I can’t help but think he would make a perfect husband for my little Rosino when she gets over her schoolgirl crush on that unspeakable Ranger person.

The De Varellos are an old family and she would have dappers to meet her every desire, not to mention the status. I must hold a party soon and invite some desirable parties for her to meet. I am sure that if she got out more, that déclassé ranger would be history!

And talking of the Rangers, I have no idea what Orphie Dradius thinks she looks like in that outfit of hers, it reminds me of a peeled psykopla. Now that she is out of active duty, she could at least have the good sense of dressing in something more flattering. But what can you expect of a Fyros woman!

Yesterday I spotted toadface Bebi Cuirinia slinking off in a corner with one of the rangers, that Melga Folgore! He who thinks he is Jena’s gift to females. He is always traveling around talking to all sorts of people. I cannot begin to think what dealings he has with the Royal Embalmer. Maybe he has plans for his own funeral and wants to have her touch up his ugly mug. Well, to be honest I can't see her outlive him, she looks like she is about to have her seed fail any day.

Poor little Still Wyler. You would have thought with all those people there, someone could have done something. But no – not only did they let the assassin get away, but they were unable to save his life seed. Hope Ulyros is up to the job of unmasking the killer...

Can only look on the bright side, maybe the next Tryker Leader will have a tad more uh “je ne sais quoi” Some decent decorum and sense of protocol would definitely not go amiss is the Lakelands. Black is however always becoming to one. 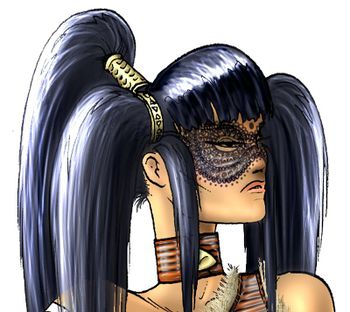 Xalis, now there is a man that has his uses, in so many ways. Even though Matis males are superior of course, he has a kind of rugged charm that intrigues me. If he can serve my purpose as well, it looks like we are going to have a prosperous relationship. I will have to take precautions to make sure he is not double crossing me, however. My maid Cinni will have to apply her special talents to check a few things.

There is a spreading fashion at court I really can't bear to see. Some people have no shame what so ever and dress up in those dreadful tryker outfits that shows so much bare skin you can hardly call it dressed at all! The latest victim of this misguided sense of the appropriate was one of the Queens new maids. The Queen was of course furious and the silly maid was promptly dismissed. But it shows that we need to carefully nourish the Matis virtues and it makes me even more steadfast in my beliefs that the old ways are the best!

Queen Lea, of course, there is a Lady who knows how to dress. She always looks such a picture and is the perfect consort for our handsome and elegant king. I wonder when we will see some more additions to the royal family? It’s certainly been a long time since the last one. She was actually looking a little plump the other week, but I expect that is just overeating, these Royal banquets play havoc with one’s diet. – all those rich foods..

Oh well, time to prepare for the Zorai ambassador’s ball tonight, let’s hope they cut the pre - food meditations a bit shorter this time – 35 minutes is rather too long in my opinion...

I have been following the circus-like antics of the recent Tryker election closely, and my maid, Cinni, has been doing a little investigation for me in addition. All I can conclude is that the Tryker state must be at a very low point indeed when it comes to class, decorum and the basics of style management.

Would you believe the candidates that have stood in this election? An upstart little twerp of a tryker called Learoy Shilly, who is obsessed with standardization of tryker armor and the values of anything tryker made. And to show his faith in his own ideas he is wearing a Matis caster pants! It had my poor maid in stitches for ages when she described his choice of attire. How stupid can you be?

The Skipper is actually boasting of being a pirate and seems to regard money laundering as a legitimate means of financing the tryker government and economy! No wonder he has to turn to such illegal means when all he can do is to construct sinking boats and salivate over the Mayor of Windermeer. Perhaps he needs the sinking boats for all his money washing...

Now the Mayor of Windermeer is a personage I would not let over my doorstep, not even on a sunny day. O'biggan Brassen is her name, my maid tells me and she is about as big and brassen as her name suggests. I doubt even Learoy Shilly would manage to standardize her bodice, which my maid in a fit of giggles called the Bodice of Doom. I'd say the tryker would be facing both doom and gloom if the good Skipper had won the election. To top it all, that drunkard Rehn Kirran joined the race and was pretending to be serious about politics, as if he could be serious even in his most sober moments. His pretty doll of a wife has about as much wits as her husband and my maid tells me she has not shown up much in the campaign. I think Rehn is afraid she will show just how silly she is and ruin his assumed gravitas. I would not put it past her to show up and drag him out of a debate or campaign meeting to come home and pick flowers for her. Silly romantic snippet! Now Cinni tells me that Rehn is actually to be Deputy Governor in charge of all Tryker defense! Was I a Tryker, Jena forbid, Gosh that would make me sleep soundly in my bed not.

The only serious candidates in all this were the Lady Ailan and Shaley Nara. It seems that Shaley should have kept to her guard job; as the Trykers ignored her in the 1st election round. It is a shame really, Shaley is a decent girl and devote Karavan follower as is proper and right.

That’s more than can be said about Ailan, calling herself Lady, as if the Trykers have any aristocracy! I don't care if she descends from Jena herself, it is indecent to pretend to be a tryker and a Lady! She is just as plain and homely as the next tryker girl and the way she flirts with the Fyros is sickening. How can she do this and hope for support amongst the Trykers? Still Wyler should have taught her some political maneuvering in the 10 years she was his advisor, or maybe the advisor role was of a different kind?

Still, now that it appears that she will be the new Governor, I will have to gain an introduction, perhaps she would like to come to my next dinner party. She’d better not wear that hat though, it looked strange enough on old Still Wyler! Indeed maybe I could give her some style counseling.

— Lady Chiabre of the Matis court