Chronicle of an episode in the life of Rosen Ba’Darins. Written in the year 2486 (JY), by chronicler Derry O’ Darren

Rosen Ba’Darins was still in his youth when this story took place, in his "blooming age", as some might call it, but this young man nearly lost his life, due to his fear of the unknown: a fear that overcame the comfort of knowledge.
Rosen was a slave among slaves, held captive by the Slavers tribe, which planned to sell him and many other captives. Like many other captives, Rosen dreamt of casting off the shackles that held him and fleeing his captors. Trykers have long been the advocates of freedom, and the fate awaiting these captives, to serve under some Matis or not very conscientious Zorai, became more unthinkable with every passing day. And so, the Trykers kept searching for a way around their intended fate. 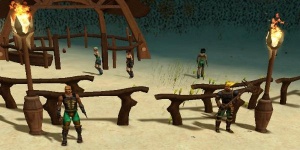 Flight from the Slavers was a daunting task. Through the chinks in their corral, they could see vast steps on which the corral was placed, too high to scale easily, and beyond that, many predators that they would have to either elude or kill: Torbaks, Zerx, Ragus and, even worse, the feared Kitin. The Slavers were carelessly confident about leaving the pen partly open as they were quite sure that their captives would not dare risk the teeth and claws of their living enclosure. The Slavers took great delight in telling their captives tales of impending Tryker death and dismemberment if they so much as thought about an escape. Even so, Trykers draw their greatest inspiration from the power of dreams, and there is no inspiration stronger than that of Freedom. The Tryker slaves, Rosen included, debated among themselves about every possible way to regain their freedom.

One evening, one of the Trykers, Jigden, recited his latest idea over the glow of a small fire, which burned in a corner as far away as possible from their captors' hearing:
− “We should grab every opportunity we can get to escape from here,” whispered Jigden to the dozens of united Trykers, their large wide-open eyes shining with enthusiasm.
− “This region is packed to the teeth with things that would like to eat us for supper, but we will be able to avoid them if we are clever enough.”
These words made everyone gather together even closer around the fire. Lowering his voice even more, Jigden resumed:
− “We cannot travel the lands surrounding us, but even so, none of us want to live the rest of our lives as slaves, right?”
His words left the others silent and wondering. He pointed his finger to the sky.
− “Let us find our way to the Canopy. There, up high, we shall be free again.”
− “And could we reach the high branches of the bark?” asked Dachan. “Have you invented a way to fly?”
− “Why invent something that already exists?” said Jigden, with eyes glowing with sheer pleasure. “I have often told you, Dachan, that Atys itself is the greatest creator!”
− “You want to use Ybers? They never fly that high, you know,” another one said. 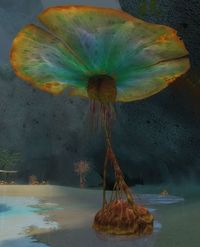 − “Botany, Chychy," answered Jigden. “Let us use Flyners! They are lighter than air and are only attached to the soil by a slim root. If each of us were to hang on firmly to a flower and cut the root, we should gain enough altitude to reach the Canopy, and there, in the heights, we shall be free!”
There was a buzz of conversation amongst the slaves then, but they quickly hushed themselves and pondered the idea. It was Rosen who spoke next:

− “But... what if we fall? If one of us drops his flower, what will take us there? Your plan is very risky, you know.”
− “It is most definitely a risky plan, but for my part, I am not going to spend the rest of my life in this camp, or worse, to be sold to an arrogant Matis or one of those strange Zoraï.” He then took a more serious tone:
− “No, I will take any chance possible to gain my freedom.”

Some of the others agreed to Jigden's statement in whispers, but many others, like Rosen, pictured themselves falling through the branches of the Canopy and down to a painful and tragic end on the bark. The more adventurous Trykers decided amongst themselves that the lightest of them would attempt such an escape the following day. The next morning, under the pretext of picking berries for the sleeping Slavers, half a dozen of the Tryker prisoners made a discreet sign of farewell to the others before disappearing behind a cliff.

It did not take long for the Slavers to notice the missing Trykers. Several armed groups explored the region the following evening and over the next few days with hopes of finding the missing fugitives, but they found no trace of them. Given that it would be extremely unlikely that all of the Trykers would have been eaten by predators in the same day, it seems indisputable that these Trykers accomplished their dream: to gain their freedom in the the Canopy above.
Rosen and the others who stayed in the Slaver camp often regretted not following their more adventurous friends, but they never tried to escape using a Flyner, as Jigden had proposed. For years they remained prisoners of the Slavers tribe, with the regular addition of new captives from time to time, until one day, when an expedition of Corsairs attacked the camp and liberated the slaves.
To this day, Rosen Ba’Darin can still be seen staring up at the Canopy, secretly regretting not joining his friends before his age would prevent it, to be free high up in the Canopy.