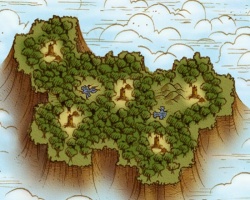 The Matis island was the original starting zone for the Matis race. It later got replaced by Silan.

In 2487 JY, King Yasson established this zone as a safe hub to welcome newly arriving Matis refugees. Five camps were set up to give Homins a refuge and offer a place for training their skills before they would eventually venture to the Verdant Heights, their new home in the New Lands.

While every race originally had their own starting zone, dropping numbers of players made it necessary to merge these into just one starting zone. As of 2006 all new players in Ryzom start on Silan which is basically a remake of the Matis island. The original starting zones have been inaccessible ever since.

When comparing the map of Matis island with that of Silan, it is obvious that they share most of the shape, except for the western part. Due to the inaccessability of the Matis island it is not possible to compare the zones any further, but what little evidence we have suggests, that Silan is based on the old Matis island.