Under the Sun Light

FEATURED ARTICLE OF THE WEEK

Still Wyler, murdered in 2532, was the previous Gouvernor of the Tryker Federation.

2478
Born in the ancient lands of Trykoth in the port of Jeniah.

2481
Loses his parents in the Great Swarming.

2483
Placed in an orphanage where he soon earns the reputation as a lovable rascal and charismatic ring leader at only 5 years of age.

2486
After the death of his favorite nanny, the rough and tumble lad runs away into the wilds. He quickly learns to reap from the land, be it the hard way, and lives out the stories of the legendary Company of Loria for himself. Makes frequent little jaunts into town where he is able to count on his dexterity and nimbleness for his dinner!

2487
He lives footloose throughout the warm season until one day, he steps straight into a ragus lair where two bloated specimens lay napping with a half eaten carcass of a capryni between them. Remembering a legendary tale of Loria, he remains calm, slowly smears his body with ragus dung to cover his odor, then turns the other way audaciously picking up a forgotten capryni leg on his way, and makes off without a sound. But no sooner has he made twenty paces than a ragus raises its head then bolts after him. Fate has it that members of the Slavers tribe are scouting nearby and save the lad from certain death. But it was out of the frying pan and into the fire. In return for saving his life he is made to skivvy for them.

2488
One evening a patrol of the tribe of Corsairs takes the Slaver’s camp by surprise. To make a quick escape they have no choice but to abandon the boy without even having the time to slit his throat. This is Wyler’s first though by no means last encounter with the Corsairs. On their handing him over to the authorities after saving him from slavery, the young Still Wyler brays that he will one day whip the Corsairs into shape like a hammer on hot amber. Little did he know how true his words would ring true! Back at the orphanage he takes up his place as chief of the kids who he both scares and fills with marvel with tales of kitins and Kamis. His urge for freedom is given a vent through his nightly escapades from the orphanage during which he slips in and out of family dwellings. He picks out a family and spends a night in their company most often without them ever knowing.

2489
On the day of his eleventh birthday he chooses to spend the night in a house that belongs to new folks in town, and not the least worthy. He is found curled up in a corner under a table by none other than Bremmen Dingle, the legendary warrior. After some harsh questioning with the lad and a few verifications with the authorities, Dingle decides to take the lad in. Under Bremmen’s judicious hand and his wife’s gentle care, the lad is gradually brought into line, taught loyalty and the values of freedom and fraternity, values as dear to Bremmen as to any Tryker who ever lived.

2490
Bremmen takes the boy with him on the campaign to free the homin lands of kitins and to secure trade routes between continents. Still Wyler kills his first kitin at the age of 12, and for the next two years follows in the footsteps of the great warriors of the Guild of Force of Fraternity. Still comes across Dexton, two years his junior, but prefers the company of real soldiers.

2492
Tragedy strikes on the route home from the kitin campaign. Bremmen Dingle and Matini Roqvini are killed by kitins under mysterious circumstances. When the governor, Rigan Mac’Darrell, ends his tribute speech to the memory of Dingle with “and who shall be our spearhead now in the face of the invincible kitins?” the 14 year old Wyler steps forward determinedly. He vows to make the Trykers strong in the memory of his master just as Loria did in her day. Wyler spends the next years in the Federal Guard teaching the Federal soldiers how to fight the kitins using the methods of combat elaborated by Bremmen Dingle and the guild of the Force of Fraternity.

2495
At the age of 17, he leads an elite contingent to crush a new kitin swarm and returns to Fairhaven amid great fanfare.

2496
He is offered the leadership of the Tribe of Corsairs.

2499
During the Autumn War, Wyler leads guerilla activities against the invading Matis garrisons in Lagoons of Loria. 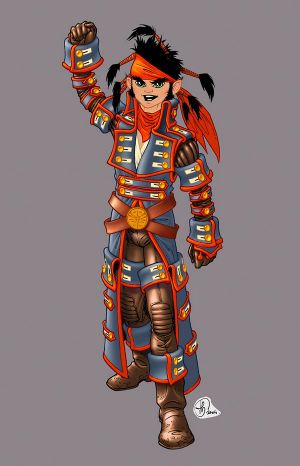 2500
Tryker forces are reinforced by a Fyros contingent led by Dexton. Wyler considers the foreign aid unnecessary maintaining that the Trykers are strong enough to fight their own battles. Nevertheless Mac’Darrell orders him to get on with the job. Dexton is captured by the Matis just as the Trykers begin to gain the upper hand so bringing an end to the battle. Wyler is deprived of his clear-cut victory against the Matis though at least he has the satisfaction of having instilled his soldiers with a new sense of honor.

2503
Death of Rigan Mac’Darrell, Wyler runs for the governorship of Fairhaven but comes a close second to the more politically experienced Beadly Nimby, the Deputy of Fairhaven. Wyler repeatedly warns Fairhaven of increasing insecurity on the borders and the mounting threat of the new Matis regime. Time again Nimby opts for a pacific issue at all costs. As a firm believer in democracy, Wyler bides his time militating against slavery and the pacifist government of Fairhaven in the face of the growing feeling of insecurity.

2507
Wyler submits a text to Fairhaven to combat slavery which later forms the basis of the Homin Rights Act.

2508
Amid the mounting tensions, Beadley the pacifist stands down. Wyler is elected to take up the reigns as Tryker Governor at the age of 30.

2509
He gives refuge to the exiled moderate Matis prince, Yrkanis (king), who in turn, before he leaves, promises to return with reinforcements to counterbalance an act of aggression from the warriors of Jinovitch, and protect Lagoons of Loria. Governor Wyler embarks on a great tour (to 2511) of the Tryker lands to rouse the Trykers from a general state of resignation and rally them under his banner. He knows the time is nigh to stand up and fight for liberty! Spies give Wyler to believe that the Matis, under Jinovitch, are building up forces to invade the Tryker lands.

2510
Wyler marries Rhiana, a member of the Corsairs who he meets on his great tour.

2512
Wyler leads the offensive against invading Matis troops and holds them at the border of Lagoons of Loria. He sends for Yrkanis in the knowledge that his presence could save unnecessary bloodshed.

2513
Yrkanis returns from Zora with an army to support Wyler in an offensive in Lagoons of Loria. But Wyler’s strategy pays dividends as many Matis, on the sight of Yrkanis, throw down their arms.

2514
After the victory in Lagoons of Loria, Still Wyler escorts Yrkanis to the Matis capital amid great acclaim and recognition. The Trykers have won the esteem of their Matis neighbors. The two leaders became firm allies, the Trykers retake possession of Lagoons of Loria. Birth of second daughter, Winneth.

2518
Wyler pushes for the adhesion of all homin peoples to the Homin Rights Act.

2525
At 47, Wyler has become a much loved leader of his people, leading them on under the banner of freedom, equality and solidarity. He has come to embody Tryker tenacity and fighting spirit. Friendship with the Matis, built around a mutual worship of Jena, has never been stronger.

2532
Wyler, now 54, gets murdered. Lady Ailan Mac'Kean follows him as the new governer.